Got a tiny little hole in my radiator. I'm imagining a mosquito wearing a helmet hitting it at 90MPH. Obviously, I was obeying the speed limit and the insect was traveling too fast for conditions. 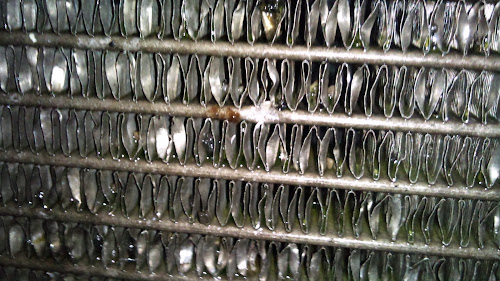 Anyway, I ordered a new one from RockAuto and will post more pictures of the new one going in.

always sucks when that kind of thing happens.
Top

To start, I unbolted the power steering fluid tank. That gave me just enough room to work around the radiator.

Two nuts in the front

One bolt on the back

I also found it easier to remove the radiator fan first. Disconnect the wires at the bottom, unscrew the two bolts at the top and lift out.

Place a large pan to catch coolant as you remove the hoses. I used the pliers to squeeze the hose clamps and slide them further down the hose.

After you slide the clamp back, gently pull the hose off the radiator.

You can also remove the cap from the reserve tank to allow the coolant to flow more freely.

Now remove the mounting brackets at the top of the radiator on each side. They have three parts:

Bolt, bracket and rubber grommet.
The passenger side came off easier than the driver. For the drive side, it is better to angle the bracket off first, and then the rubber grommet.

There is also a rubber grommet at the bottom of each side.

With the radiator out, you need to make sure it has the right mounting hardware for your fan.

old on the right
On the bottom of the radiator, there is a hook to catch the fan. The new radiator came with two hooks.

New
I simply removed the extra hook.
The screw hole on the top of the radiator also needed to be transferred.

It just slides off the old and onto the new radiator.

With the mounting hardware in place, reverse the steps to put the new radiator back in.
You can remove the rubber grommets from the bottom of the radiator and put then in the car first.

This made it easier to get the new one in.

After I got the new radiator in place, the upper bracket on the driver side still gave me trouble. I put the rubber grommet on the radiator first, then had to wiggle the bracket back in place and bolt it in.

Reconnect the three hoses and clamps. Replace the fan last. Don't forget the reconnect the wires at the bottom.

If you moved the power steering fluid tank, be sure to put that back as well.

Slowly refill the reserve tank with coolant and watch for leaks. I had to fill once, let the engine run for a minute, then refill again after it cooled back down.

Users browsing this forum: No registered users and 1 guest